How do you develop the entrepreneurial spirit among teens and young adults?

The Network for Innovation and Entrepreneurship was visited by Christina Jørgensen, the woman and entrepreneur behind the vegan icecream brand and start-up Chriis. A spontaneous idea in her last year of high school transformed into a startup company; an idea which also brough into the Lions’ Den (similar to The Dragons’ Den) on Danish television in 2015.

Christina shared her considerations and learning points on being a young entrepreneur, which greatly inspired the professional network in the City of Knowledge. On the specific question on how to develop the entrepreneurial spirit among teens and young adults, her answer went a little like this:

”If I had to pick something to help further the entrepreneurial spirit among my peeers, it would be to have an incubator environment at school and a mentor corps of experienced entrepreneurs. It would entice some of those young adults, who doesn’t necessarily envision themselves as entrepreneurs. It’s also important that the educators and teachers create an environment for creative and innovative problemsolving in the classroom, so that pupils and students get the opportunity to create their own solutions.”

Recommendations to take root in the City of Knowledge

Christina Jørgensen was equally excited to hear about the focus on entrepreneurship in the City of Knowledge, particularly among the primary school and upper secondary educations. Ivar Ørnby, Coordinator for the City of Knowledge Network for Innovation and Entrepreneurship and Director of Education at KNord, summed up the takeaways from the meeting:

”The network will continue to work with the recommendations given by Christina and at the same time I hope that the municapality will intensify their own efforts in entrepreneurship among teens and young adult by, for example, developing a strategy for innovation and entrepreneurship so we can continue to develop the innovation chain from primary school to the upper secondary education all the way to higher education.” 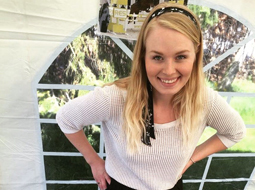 About Christian Jørgensen, entrepreneur and founder of Chriis

Christina is 23 år and graduated from high school in 2014 from Frederikssund Gymnasium. Christina and her partner at the time participated in the entrepreneurshow ‘The Lions’ Den’ on Danish television channel DR1 in 2015, where they ended up with three investors backing their idea. Christina now makes a living from her startup and is currently preparing market entry in England and Germany.

Technical universities from across Europe met online in early November to discuss how we can emerge stronger from the crisis.